On 2 April 1996, a landmark judgment in favour of two Leeds residents, brought up in the shadow of an asbestos factory, was handed down by the Court of Appeal. Repercussions of the Court’s decision in the case of Margereson and Hancock –v- JW Roberts Limited would echo across the UK, and as far afield as South Africa. The two claimants had fought to prove that Turner & Newall (T&N) JW Roberts’ parent company, had failed in their duty of care, not just to their employees but also to those like June Hancock and Arthur Margereson who had lived near to the Defendant’s Armley factory.

June, who was born on 21 June 1936, grew up in Armley and attended Armley Park School; her mother, Maie, also had a sweet shop located close to the asbestos factory on Canal Road in Armley. As a child, like so many other children in the neighbourhood, June played with asbestos which was blown out of the factory’s roof vents and ‘swirled like snowflakes’ through the surrounding streets, drifting in piles on windowsills and other surfaces. The factory’s loading bays were ‘like a magnet’ to local children who would regularly gather to play hopscotch and roll marbles and spin tops on the flat surface of the loading bays, as the area was quite hilly. Children would go to the local butcher’s shop and ask for a blown up pig’s bladder which they would use as a football. They would also jump on the bales of asbestos which were placed on the loading bays and only occasionally be shooed away by the foremen. Innocent childhood games; but with a very dangerous legacy.

An aerial photograph of Armley Clock School (adjacent to Canal Road and situated slightly higher than the factory) showed the playground covered in dust like a carpet of snow; the school children would play outside and the younger ones would even take an afternoon nap on little camp beds in the playground, when the weather was fine. 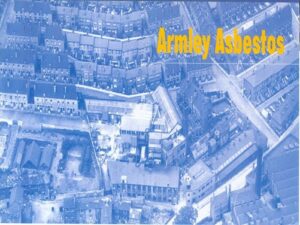 During the second half of the last century, hundreds of Armley residents paid a terrible price. The area was found to have the highest UK incidence of mesothelioma; June Hancock’s own mother, Maie Gelder, very sadly died of mesothelioma in 1982. When June was diagnosed with the illness in late 1993, she vowed to take on the multinational company (T&N) whose negligence she believed had caused her mother’s premature death and would, likewise, rob her of her old age and seeing the births of her grandchildren. “Two in one family is too many”, she said poignantly.

The Armley factory began producing textiles in 1874; some twenty years later, having been acquired by the Turner & Newall group, JW Roberts embraced asbestos technology and it went on to become one of the country’s biggest producers of asbestos insulation and asbestos-containing fireproofing products (in particular sprayed ‘limpet’ asbestos) exporting to some 60 countries worldwide.

Tragically, for the residents and their families who were so badly affected, the factory was located in a densely-populated area with back-to-back terraced housing encircling the industrial site. The company would later claim that it could not have known about the dangerous effects of asbestos exposure until after the Leeds factory closed its gates in 1959, well beyond the time when June Hancock and Arthur Margereson played in Armley’s dust-covered streets.

T&N’s lawyers argued, at the six week-long trial in Leeds High Court in the summer of 1995, that it did not have specific knowledge of the risks associated with the asbestos cancer, mesothelioma, until the mid-1960s; they also argued that their responsibilities extended only to their workforce, conveniently overlooking the fact that, in the process of sucking dangerous asbestos dust out of the factory in Armley in order to comply with the regulations in force, and as a consequence polluting the whole neighbourhood, they had exposed many hundreds (if not thousands) of people and children to the same deadly threat.

June Hancock and Arthur Margereson (represented by his widow Evelyn) won the case. The trial judge, in his 226 page judgment, concluded that T&N did indeed owe a duty of care to those living in the immediate vicinity of the Canal Road factory and to those former children (like June) who played on the factory’s loading bays.

I am very proud, together with a number of my colleagues (in particular Alida Coates and Ian Bailey who still work with me some 27 years later) to have been able to play a part in making such a significant difference on the part of the Hancock family and many more in the Armley area, and to have helped to achieve justice for thousands of victims of asbestos disease in the UK.

June’s family, myself and her treating consultant, Dr Martin Muers, helped to establish the June Hancock Mesothelioma Research Fund shortly after June died in 1997; it was the first mesothelioma research charity to be formed in the UK and its work continues to this day, 25 years later.