November 2004 started in the usual way with the whole family suffering from coughs and colds. However December and then January came and went and we had all recovered, except Dad.

Mum spent the whole of January nagging him to see the doctor and finally at the beginning of February 2005, an appointment was made.

The doctor confirmed there was fluid on Dad’s lung but instead of the usual prescription for antibiotics that we were all expecting, his lung was drained and we were then given the devastating news that he’d been diagnosed with mesothelioma. 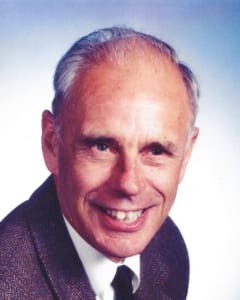 Dad had always been a very fit person. At 71 years old, he had never learnt to drive and so walked everywhere, regularly walking into Eastleigh, our nearest town.

Every morning, he’d walk down to the village shop to collect his newspaper, but what he had neglected to tell us, was the increasing breathlessness he was experiencing.

Dad had spent his whole working life at Eastleigh Railway Works building vehicles and he’d spoken to us many times about his constant exposure to asbestos. He would also talk about the increasing numbers of his work friends who were being diagnosed with what at the time we only knew as ‘asbestosis’.

He had taken early retirement in 1995 and was determined to make the most of his new leisure time. He was a really active person and loved playing bowls and would always have his sleeves rolled up, whether it was doing DIY for the family or pottering around in his beloved garden. He also loved genealogy and taught himself how to input all the information he uncovered on to his new computer.

For a short while after his lung was drained he felt relatively well and managed to carry on doing all the things he loved. The 10th of July 2005 was Mum and Dad’s 40th Wedding Anniversary and we spent a lovely family weekend at Butlins which everyone enjoyed!

But it was at this time that we all noticed a change in him. He had always loved swimming and was upset when he found that he could no longer manage to do it. It was like his ‘spark’ had gone out.

We spent hours surfing the web looking for answers. We came across the Mick Knighton Mesothelioma Research Fund and after the complete isolation we had felt since the devastating diagnosis, we received welcome support from Chris Knighton.

We also found the chemotherapy drug, Alimta. We spoke to Dad’s consultant who felt that he would benefit from the treatment and we applied for funding. But unfortunately our Primary Care Trust (PCT) refused.

We enlisted the help of Eastleigh’s MP Chris Huhne; but the PCT were still unwilling to help and would only offer ‘Vinorelbine’ which would make very little impression on Dad’s illness.

The whole family felt it was a disgrace that people who got this dreadful disease through no fault of their own, (only through the negligence of others) were not being given access to a treatment which could give them a better quality of life. It was difficult to understand why, in an area which has been blighted with asbestos-related diseases for so long, that this potentially effective treatment was not being offered.

Sadly, our dad, Dave Salisbury, a beloved husband, father and grandfather lost his fight with mesothelioma and died at home on the 10th of December 2005, less than ten months after his initial diagnosis. He was only 72 and left a huge hole in all our lives.

In 2006, we launched HASAG in memory of Dad to provide the help, support and advice we felt was sadly lacking in the area for people suffering from asbestos-related diseases and their families and to raise awareness of the dangers of asbestos. We now help people across the whole of the South of England, including London and the Home Counties and fundraise and campaign for more research and better treatment and care for victims of asbestos.